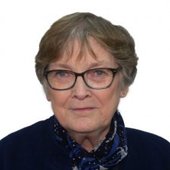 Diana Robbins has spent most of her career working as an independent policy analyst and evaluator. She has worked for central and local government, arms-length bodies, and third sector organisations, as well as for the European Commission. Her focus has been on health and social care, poverty and equalities. She has been consistently interested in the theory and practice of involving people who use services, their carers and the general public in the development and implementation of policy.

Diana was for some years a Non-Executive Director of the South London and Maudsley NHS Foundation Trust. She also reviewed research applications to the NIHR from a Lay/public engagement perspective for the past six years. Most recently, she was Lay Member with responsibility for Public Engagement on the governing body of the Lewisham Clinical Commissioning Group, and in this role was very aware of public perceptions of and concern about data privacy.

Back to cag members
Stay up to date with latest news, updates to regulations and upcoming learning events
© Copyright HRA 2021
Site by Big Blue Door
We need your feedback!